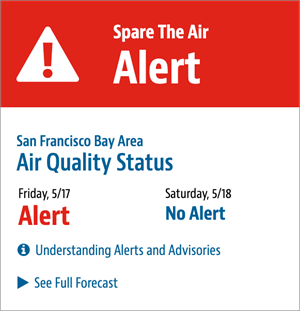 From April to October, warmer temperatures and longer days can cause ozone to build up to unhealthy levels. When this takes place, the Air District will issue a Spare the Air Alert.

There are everyday behavior changes, such as taking public transit, carpooling, or biking, that can improve air quality year round. These actions are particularly important on days when a Spare the Air Alert is called. 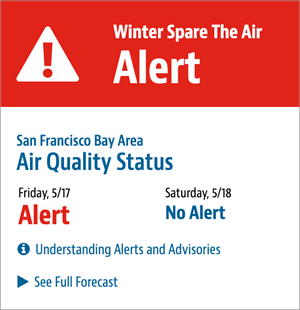 Issued between November 1 and the end of February, a Winter Spare the Air Alert is called when particulate matter is expected to build up to unhealthy levels. On cold, calm days wood smoke can get trapped close to the ground.

On days when a Winter Spare the Air Alert is in effect, it is illegal to burn wood, fire logs, pellets, or other solid fuels in fireplaces, wood stoves, outdoor fire pits, and other wood-burning devices. 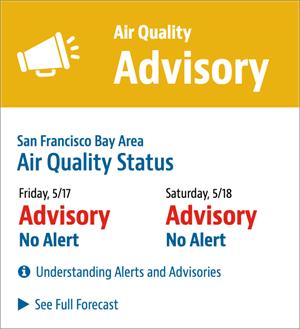 When local air quality is being affected by events such as wildfires, but federal health-based standards are not expected to be exceeded, the Air District will post an Air Quality Advisory.

For instance, an Air Quality Advisory might be issued when wildfire smoke from nearby areas, such as southern California or Oregon, affects air quality in some parts of the Bay Area.

Air is almost always on the move. The Bay Area shares its air, and actions to cut back emissions in one part can have significant impacts on the air quality in locations miles away. That is why when air quality is expected to be unhealthy in any part of the Bay Area, a Spare the Air Alert or Winter Spare the Air Alert is called for the entire region. Sign up for alerts.